Your first stop will be in the Tlatelolco neighborhood of Mexico City. Three cultural integrations, buildings of different periods, once the seat of the Mexican Ministry of Foreign Affairs.

The last spot are the great Teotihuacan Pyramids, which were built around 100 b.C. as the centerpiece of an enormous ancient city that is often compared to ancient Rome. They were inexplicably abandoned centuries before the arrival of the Aztecs, who called the ancient architectural marvel the Birthplace of the Gods. This UNESCO World Heritage site is one of the most impressive archaeological sites in North America, presided over by the third-largest pyramid in the world (Sun Pyramid), which is roughly equal to that of Egypt’s Khufu pyramid. 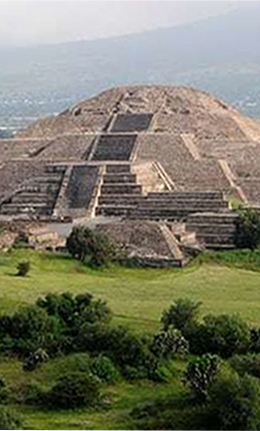 This trip no require special training or skills, just a reasonable level of fitness and a willingness to participate. Dust and gravel paths are common in this tour.

It can be be quite strenuous to climb the Sun Pyramid at Teotihuacan.

Premium transportation is included in this tour. The size of the vehicle depends on the number of people travelling.

Feel Safe! All our clients are covered with an accident insurance*.

This insurance is only valid if as a direct consequence of an accident; the client (insured) is required to undergo medical treatment, surgical intervention, hospitalization, use of an ambulance, medicines or laboratory studies.

Understand by accident; is an undesirable, incidental, and unplanned event that could have been prevented had circumstances leading up to the accident been recognized, and acted upon, prior to its occurrence.